Motorcycle Racing: How to Start and Women to Cheer For

By Margie Siegal and WRN Staff

Since women are increasingly interested in both sports and motorcycle riding, it is no surprise that women have become increasingly interested in racing motorcycles. Women are taking part in all flavors of motorcycle competition. You’ll find women competing in roadracing, motocross, dirt track, drag racing, trials, (where the goal is to gracefully pirouette over obstacles without putting a foot down), and land speed records at Bonneville, where WomenRidersNow.com (WRN)'s Erin Sills has made history with speeds that most of us would never dream of attempting. For those who like classic bikes, there is a thriving vintage racing scene. If you are looking for a challenge, there is one to fit your interests, abilities and budget. 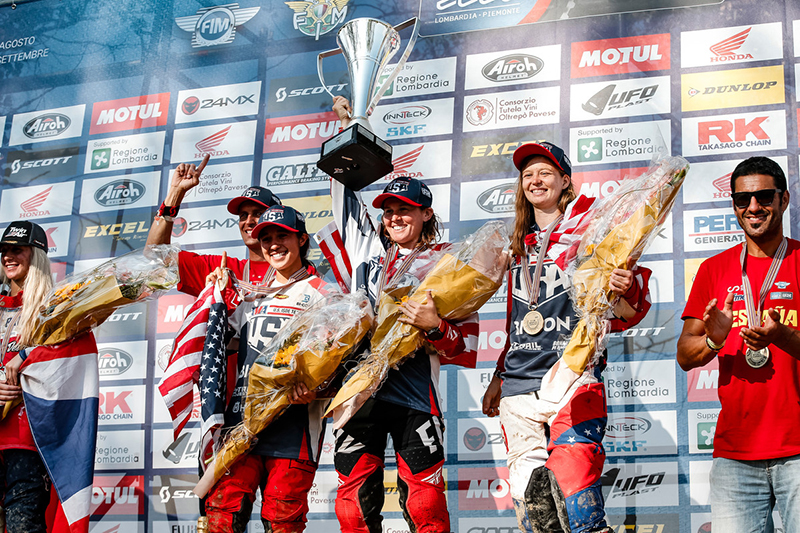 This is the U.S. Women’s ISDE (International Six Days of Enduro) team celebrating victory in 2021. This win inspired a whole new generation of female dirt riders. 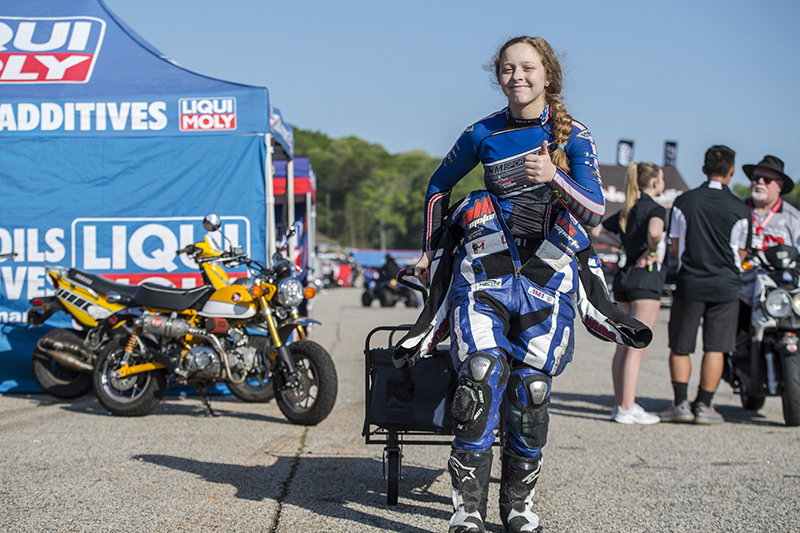 14-year old Kayla Yaakov from Pennsylvania recently made history as the first female rider to win an event in the U.S. National Road Racing series at MotoAmerica. Congratulations Kayla!

American Motorcyclist Association (AMA) serves as the rule-making and sanctioning body for most types of racing in the U.S. You can find the AMA’s listing of its races and events at AmericanMotorcyclist.com, which can be sorted by city, state, and type of racing.

The World Federation of Motorcycling (FIM) was founded in 1904 and is the world sanctioning body for motorcycle sports as well as an international organization that works to defend the rights and interests of motorcyclists, the sport, and the global industry. The FIM’s Commission of Women in Motorcycling’s mission is to create and enhance egalitarian opportunities and to promote equal treatment for women involved in activities related to motorcycling. Check out and download the FIM’s Dream Big Book here to find out about some of the world’s most influential women racers and inspirers.

The Western Eastern Roadracing Association (WERA) is one of the oldest national motorcycle racing organizations and is partnered with the AMA in its focus on roadracing. Many amateur racers participate in this series with hopes of growing into the AMA series. WRN profiled a roadracing hopeful, Sarah Irvin here.

Ashley Fiolek, a multi-time women’s motocross champion wowed the sport as the first championship winning deaf motocross racer. She has also been a keynote speaker at the AMA Women and Motorcycling Conference, her speech being interpreted vocally by her mother. Photo courtesy of DPR photography.

Off-road racing comes in many forms and is often a family event. If the idea of off-road competition interests you and you want to learn how to do it, check out WRN’s beginner’s guide to racing dirt bikes here. 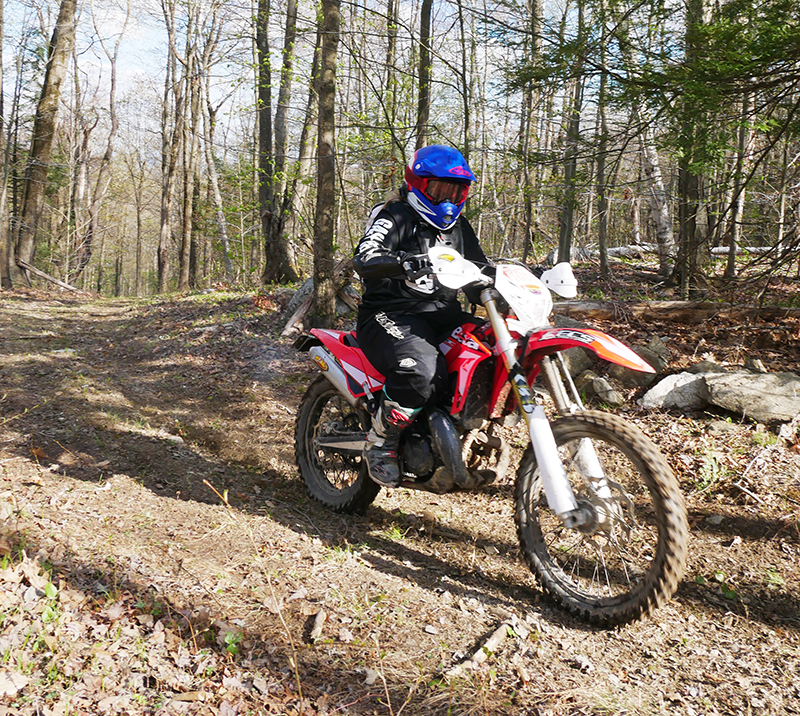 Marika Krejci and Greg Palmart have women-only dirt bike riding classes called Dirty Girls where all levels of dirt bike riders are able to learn and practice their skills.

American Honda has classes that offer an introduction to off-road riding in several different U.S. locations. There are also many competition schools, some of which cater specifically to women.

Taking an all-women’s class to learn to ride, like the Dirty Girls dirt bike training, is a great way to have fun in a non-competitive atmosphere. And you make great friends while learning something new.

Debbie Matthews and Heather Majcherek’s Women's School of Motocross (WSMX) offers MX instruction for pros, beginners, and every level in-between. With 27 years of pro racing experience, this school will help you become a better, faster, more confident rider on the track, in the desert, or on the trails. Debbie Matthews even helped WRN’s own Sarah Schilke get into amateur motocross racing.

The Babes in the Dirt and Over and Out Moto weekend camping events such as the one WRN's Maggie McNally reviewed here is another fun way to hone off-road skills and bond with other like-minded women.

Looking for a coach in your area? You can easily find a USMCA (United States Motorcycle Coaching Association) coach for individual training and check out their bios at MotorcycleCoaching.org. For example, Ashley Fiolek, four-time AMA women's motocross national champion, X-Games gold medalist, and stunt performer, is available in the Salt Lake City, Utah, area.

Enduro competition involves getting from point A to point B over a set course while finishing each section of the course within a specific window of time—no faster and no slower. Many women have been inspired by the U.S. Women’s International FIM International Six Day Enduro team, which won the Women’s World Championship in 2021. Follow the national enduro series here. Some of the many women racing the dirt are Rachel Gutish and Tara Gieger.

Motocross is racing in the dirt around an outdoor loop course and includes big jumps. While enduros generally follow along a natural trail course, motocross is held in a park with a course that is created by the park owner. A top woman in this sport is Jordan Jarvis.

Supercross, a similar racing style to motocross, also features a dirt loop course but is held in a stadium where the course with much bigger jumps is completely man-made.

Trials competition is a common sport in England and Europe, but is less known in the U.S. and involves a short super slow speed obstacle course where riders bounce around from object to object without dabbing a foot down. Follow the U.S. national series here and root for Madeline Hoover, the current U.S. women’s champion.

As a result of the popularity of enduro and motocross, several promoters have invented hybrids of traditional competition forms with the aim to make them more spectator-friendly. The World Off-Road Championship Series (WORCS) is one of the most popular, and consists of a combination of cross-country and motocross. Find the WORCS schedule here and follow Brandy Richards, the team captain of the world championship-winning 2021 ISDE team, who has been cleaning up in this series. 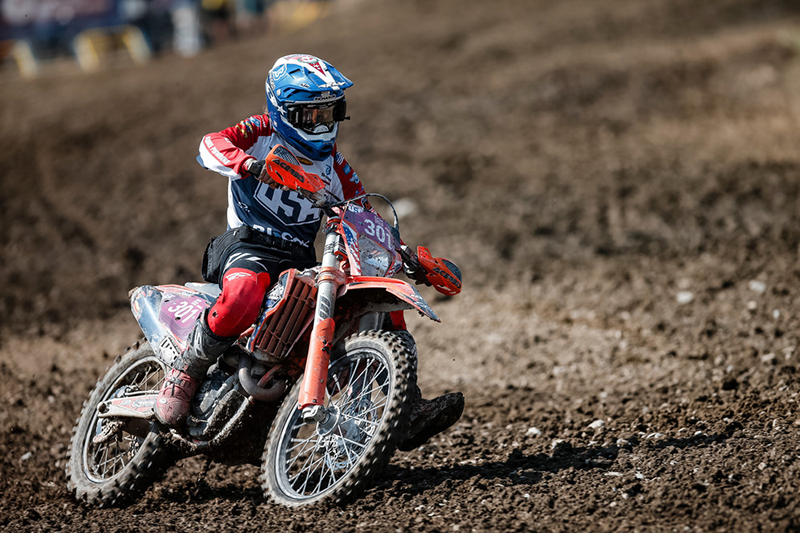 KTM-Supported rider Brandy Richards, part of the U.S. Women’s ISDE team that raced to victory in 2021, currently races in the WORCS off-road series.

EnduroCross, another popular race series, takes place indoors, in stadiums on a dirt loop course with logs, boulders, and other enduro sections between motocross style bermed turns. Find info about this series here. Shelby Turner won the women's division in 2021 and now offers training for riders at Shelby Turner Racing.

Quite a bit different from the board track racing featured in Cris Sommer Simmons’ story about the Sons of Speed races at Daytona Bike Week, American Flat Track (AFT) racing has grown in popularity and has seen more female competitors in recent years. The current national star is 31-year-old Shayna Texter-Baumann from Willow Street, Pennsylvania. 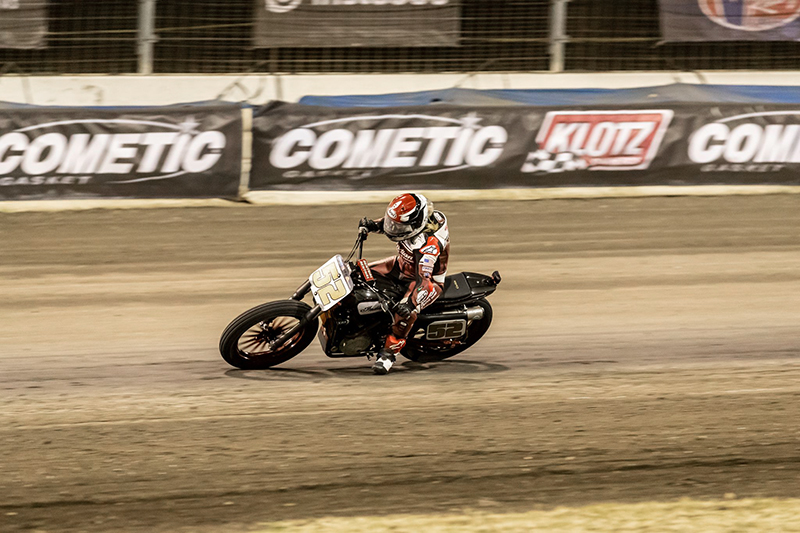 Known as the “First Lady of Flat Track,” Shayna is a key rider for Indian’s Wrecking Crew, piloting the FTR 750, the race version of the popular FTR 1200 S street bike.

Build. Train. Race. is Royal Enfield’s annual opportunity for women who aspire to either road racing or flat track honors. Like WRN’s story here outlines, since 2020, the Build. Train. Race. program has been selecting a group of women to be given a new Royal Enfield who are then mentored to build their bike into a racer. Once the bike is complete, they are trained on how to get around a track, and then compete in national venues.

Drag races blast off on a measured quarter mile, with national racing under the National Hot Rod Association (NHRA) umbrella. There are arguably more women at the top of this sport than any other type of two wheeled competition. At the time of this writing, three women are in the top ten 2022 Pro Stock standings, with 3x winner Angelle Sampey from Luling, Louisiana, in the lead. Karen Stoffer is in 6th place and has 11 career wins to her credit while Angie Smith from Winston-Salem, North Carolina, is closely following from 7th place. 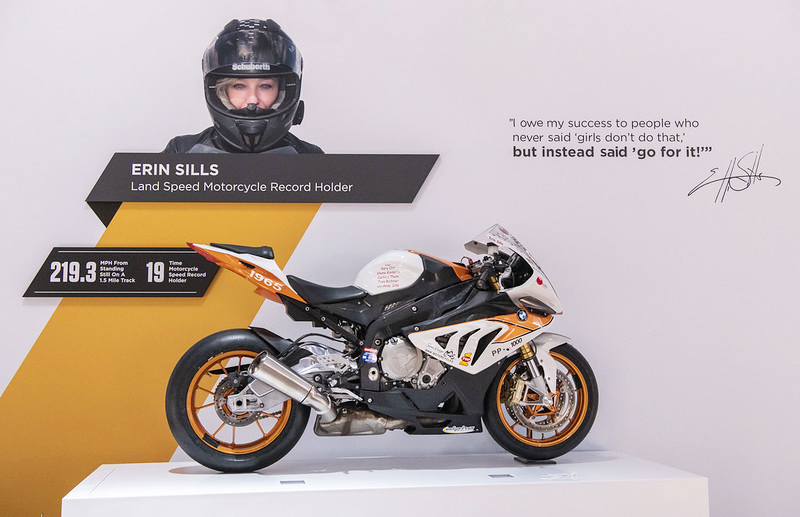 Women like WRN’s own Erin Sills have made history racing the salt flats of Bonneville, Utah and Uyuni, Bolivia.

Women do very well in land speed racing also, and it is one of the rare forms of motorcycle racing where men and women compete equally against one another with no distinction for gender. Some of the top women racing the Bonneville Salt Flats are Erin Okenek, Kim Krebs, and Erin Sills, each of whom have set world and national records well over 200 miles per hour.

Land speed racing also sees plenty of vintage racers, and Stacie B. London is out there setting records on a 1967 250 cc Aermacchi. There have even been several short films made about Stacie’s efforts. If you would like to try land speed racing, the Bonneville Motorcycle Speed Trials offer a “Run Watcha Brung” opportunity to find the top speed of your own motorcycle (and self!).

Do you dream of Daytona, Isle of Man, Imola and ducking under the checkered flag before thousands of screaming fans? 14-year old Kayla Yaakov from Pennsylvania recently made history as the first female rider to win an event in the U.S. National Road Racing series at MotoAmerica! Check out these organizations which host women-only track days, where you can improve your skills in a supportive atmosphere. 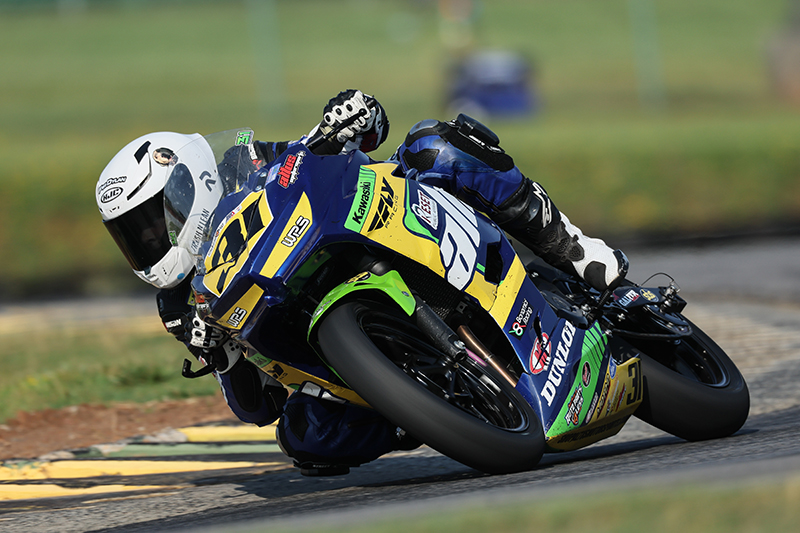 Keep an eye on Kayla Yaacov, as the young lady continues to compete in the U.S. National Road Racing series at MotoAmerica.

SportBikeTrackGirl is a branch of Sportbike Track Time, and is dedicated to promoting and involving women in motorcycle riding and racing through all-female track days, mainly in the midwest and southern area of the U.S.

The MotoGirlGT ladies track days and camps was founded by Angela Izzo-Sinkare and is a feature of Evolve GT that allows women to experience the track comfortably by helping them fit into the scheme of things at the track in a fun and learning environment.

After being involved in the sport with rider and team sponsorship for more than five years, securing a huge amount of success accomplishing TT wins, Macau wins and more, Faye decided to pursue her dream of being a team owner of a professional motorcycle race team. Though not a woman-only racing organization, FHO Racing features its female competitors in its yearly “Girl Squad.”

For more events for women motorcyclists and those who ride with them, be sure to check out WRN’s Calendar of Events here. If you know of any women-specific racing events or training programs, please send the details to info@womenridersnow.com.

Author’s note: This article would not have been possible without help from Bree Poland/Royal Enfield, Tom Moen/KTM, Indian Motorcycle, the MotoAmerica media team, and especially Debbie Matthews from Women’s School of Motocross (WMX) who really went above and beyond. A tip of the helmet to all!