How do 30 women riding motorcycles create a buzz that alerts the media and has towns putting up welcome banners, blocking traffic, and throwing parades and parties in their honor? If you were anywhere along America’s historic Route 66 from Chicago, Illinois, to Santa Monica, California, last June or if you followed along as I posted pictures and videos each night during the two week, 2,000 mile ride on WRN’s Facebook page, you may have caught a glimpse of the AMCA Riveters’ Chix on 66. 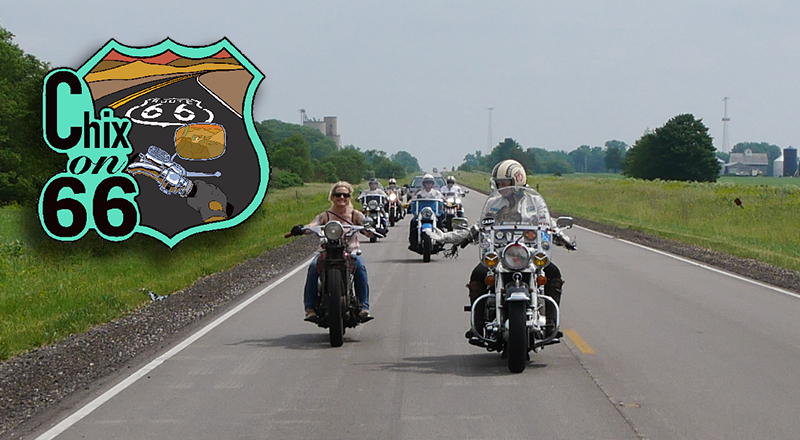 Women from all walks of life piloted all kinds of motorcycles and trikes—several of the machines older than their operators on the two week, 2,000-mile ride. Word had spread and we were being followed by AMCA members and others who caught wind that the Chix were “en route.” People were waiting to see us and cheer us on! 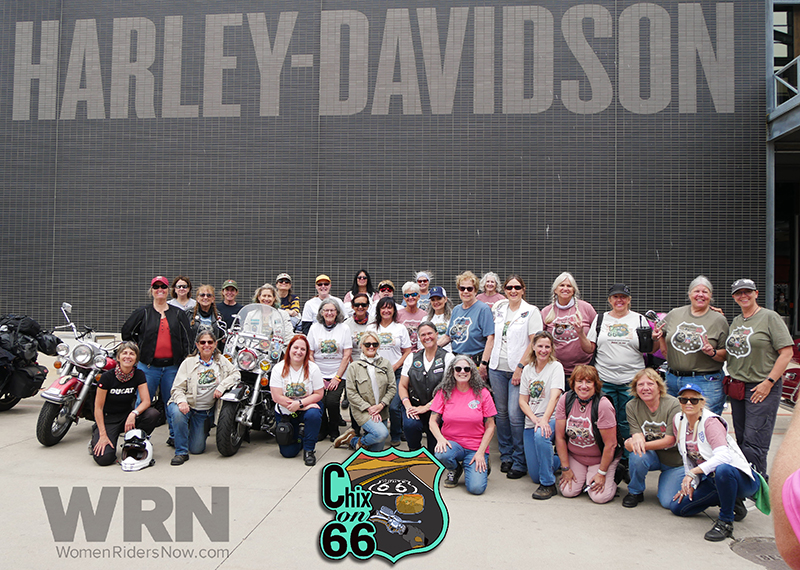 The day prior to the official start, the 30 Chix riders checked in and had their motorcycles inspected by the ride’s pro techs, Vivian “Gypsy” Charros and Athena Ransom, at the Harley-Davidson Museum in Milwaukee. Some of the Chix were even interviewed to be included in the museum’s collection about women in motorcycling! 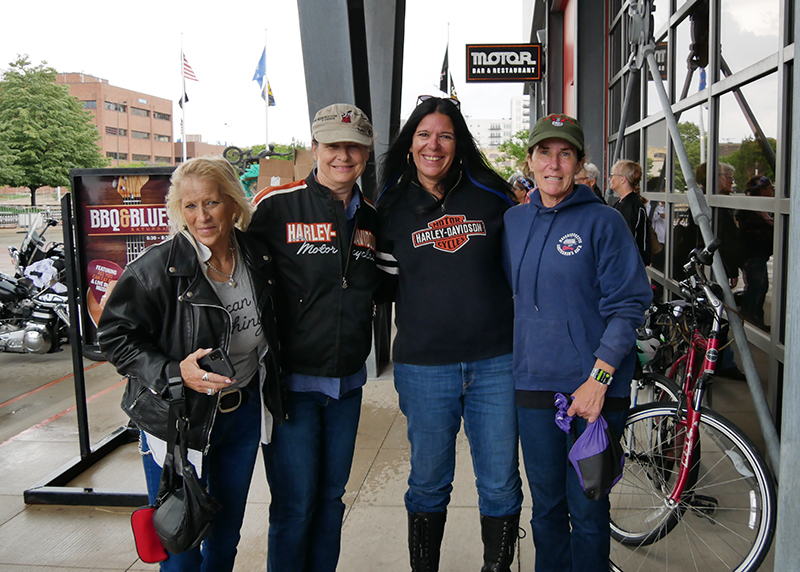 Some of the incredible women on our ride (left to right): Vivian “Gypsy” Charros, Cris Sommer Simmons, Athena Ransom, and Cindy Mesmer. 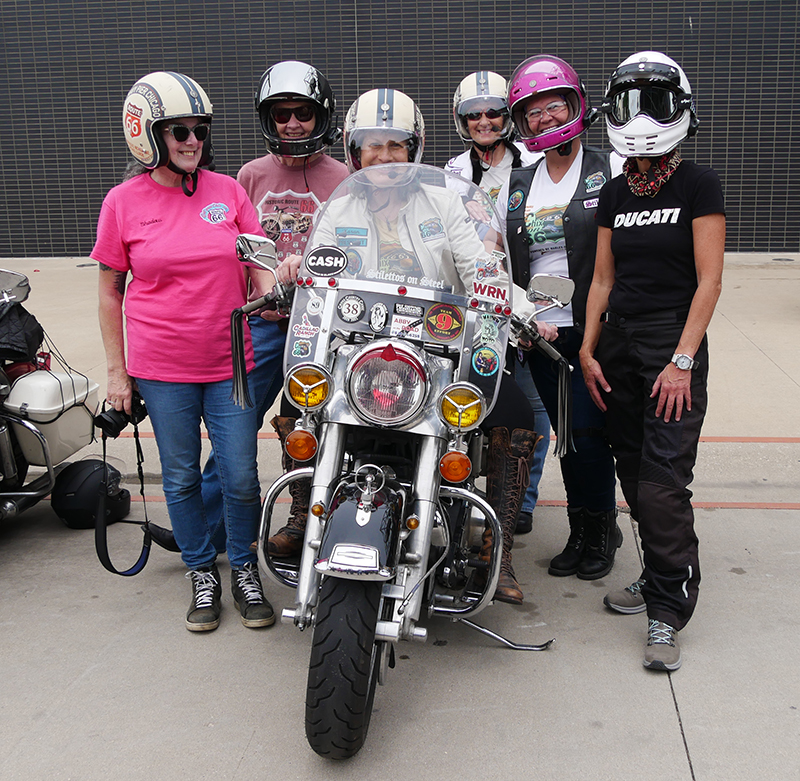 “…the road moved with the land…cars didn’t drive on it to make great time…they drove on it to have a great time.” Sally (Porsche), Cars 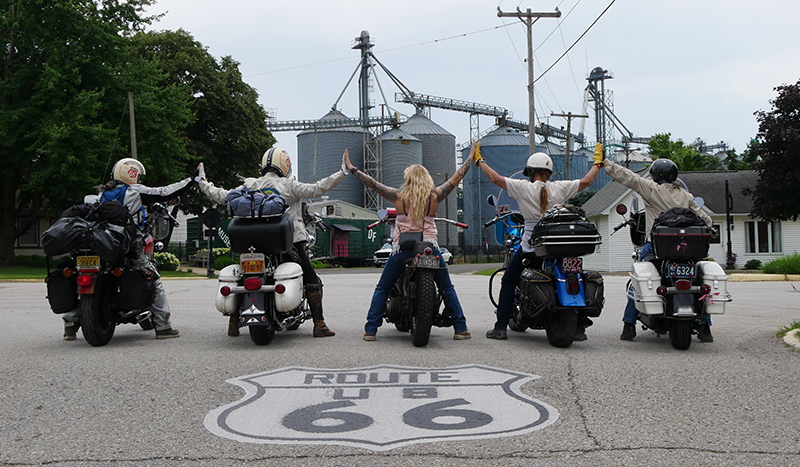 Sharing stories while creating new memories and friends is what an all-women’s motorcycle trip is all about.

Each woman had her own reason for signing up for the once-in-a-lifetime journey. Some were recently retired or widowed and were stepping far outside the comfort zone to do something exciting and different. For others, it was just a bucket list item to travel Route 66, and the opportunity to do it with other women was too good to pass up. 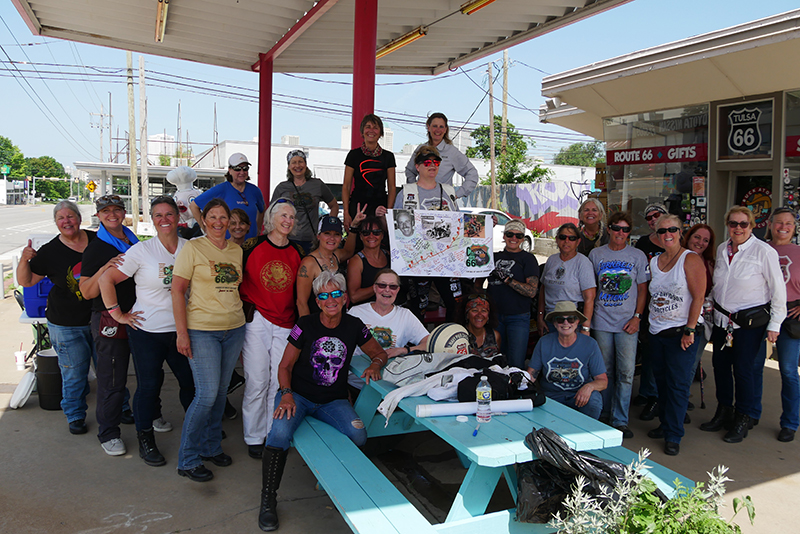 Bonding over oppressive heat and long hours in the saddle, getting lost, having motorcycle mishaps, finding the coolest souvenir, best burger, or funniest photo, and making great new friendships defines the Chix on 66 well.

When you think about Route 66, do you picture Cadillac Ranch, the art installation of vintage cars poking up from the dessert covered in graffiti? Or maybe you think of giant colorful murals with retro graphics covering brick buildings and huge statues of dinosaurs, rockets, and characters demanding your attention. Perhaps you picture neon signs, ice cream stands, hot dogs, and old filling stations. Yep, the Chix on 66 saw ’em all and more…and we have thousands of pictures to chronicle it! 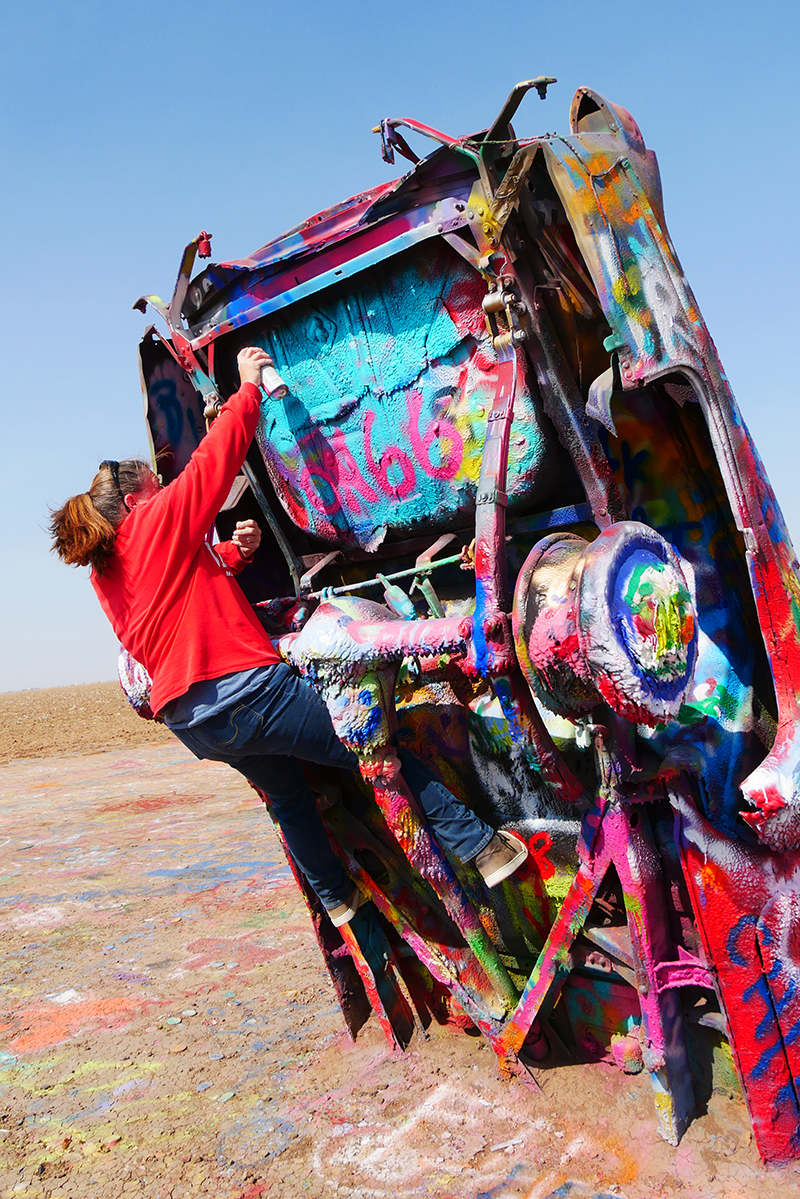 My photo assistant Kelly climbs to get the best spot to paint our i.d. tag at Cadillac Ranch in Amarillo, Texas. 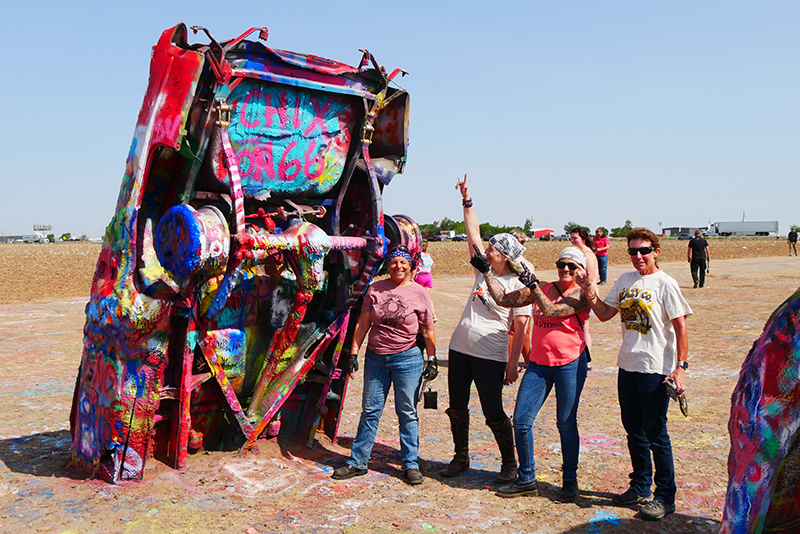 Some of our vintage riding crew, Sharon, Karan, Jenny, and Cindy spotted and loved Kelly’s work. 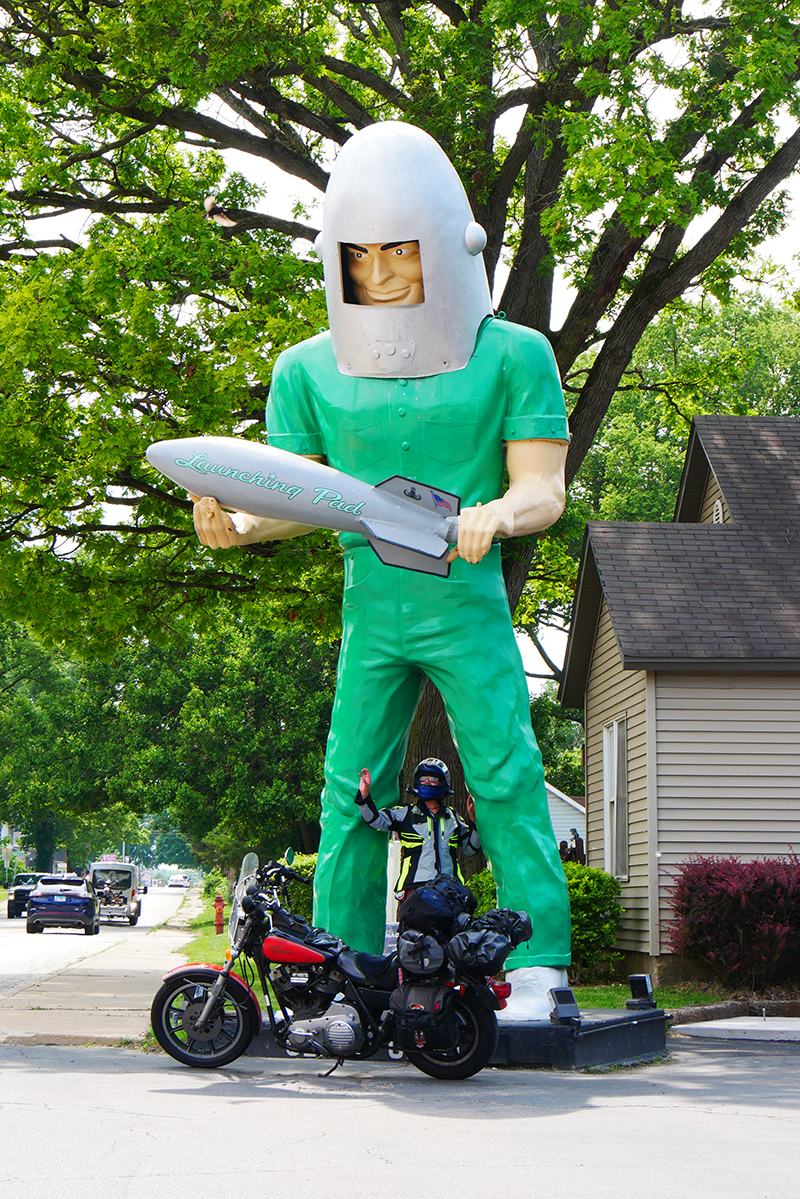 The Launching Pad Drive-Inn is the home of the iconic Gemini Giant in Willmington, Illinois. You can start your Route 66 souvenir collection or passport book, get a burger or milkshake, and meet other travelers here. 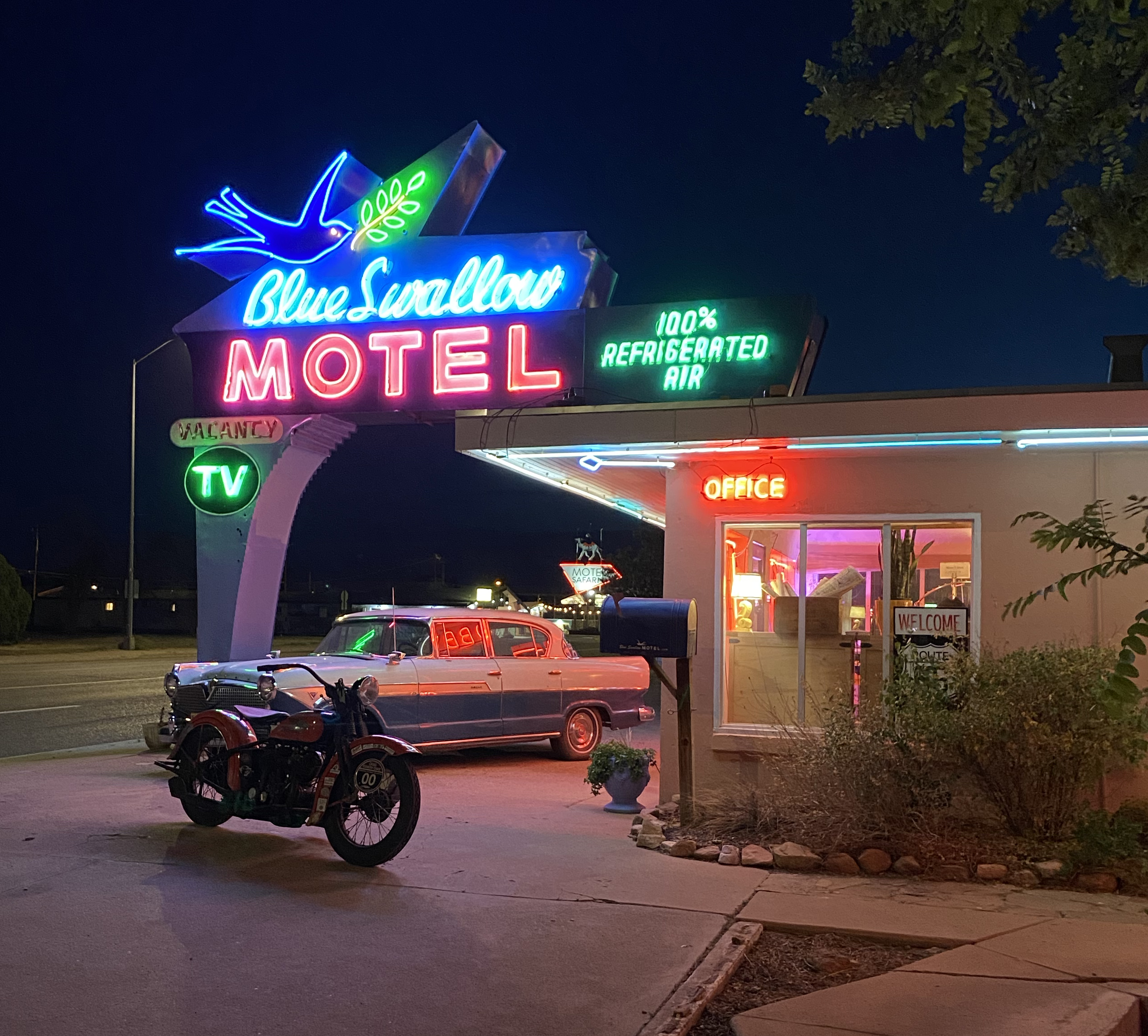 The Chix on 66 planning committee did an amazing job finding the most authentic, comfortable, and beautiful places to stay each night to rest from long hot days in the saddle. The Blue Swallow Motel in Tucumcari, New Mexico was a favorite, with classic neon signage and garages attached to some of the units. 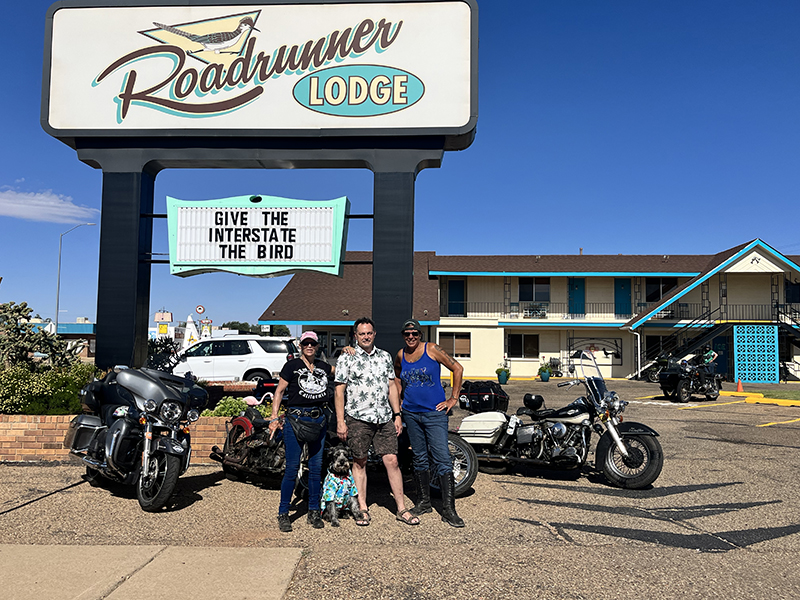 Some of us stayed down the road at the snazzy 60s-style Roadrunner Lodge. Owner David Brenner (and his pooch, Elvis) creates a welcoming atmosphere by piping in the oldies from the motel’s own radio station. Some rooms even have moon pies and vibrating beds for that authentic feel.

Chix on 66 with Clay at his shop, CCMS, in Tucumcari. As the only motorcycle shop between Amarillo and Santa Fe, “Clayface” has rescued many stranded motorcyclists on the historic route.

Not only will Clay drop everything to rescue a rider, but he donated his time, tools, and supplies to teach the Chix to change oil, tires, and fix whatever needed fixing in the comfort of his shop. 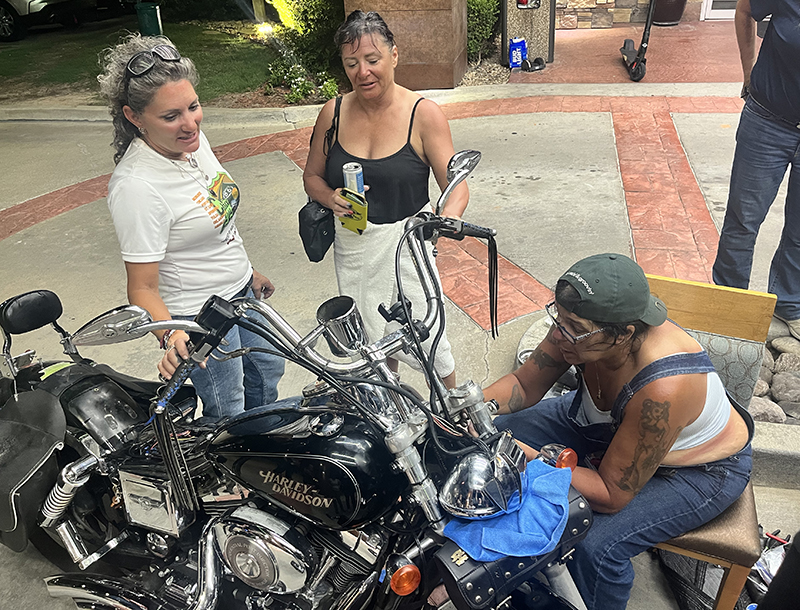 Every other night Athena and Gypsy could be found outside the hotel, sometimes until the wee hours of the morning, troubleshooting problems and helping the Chix stay on the road. 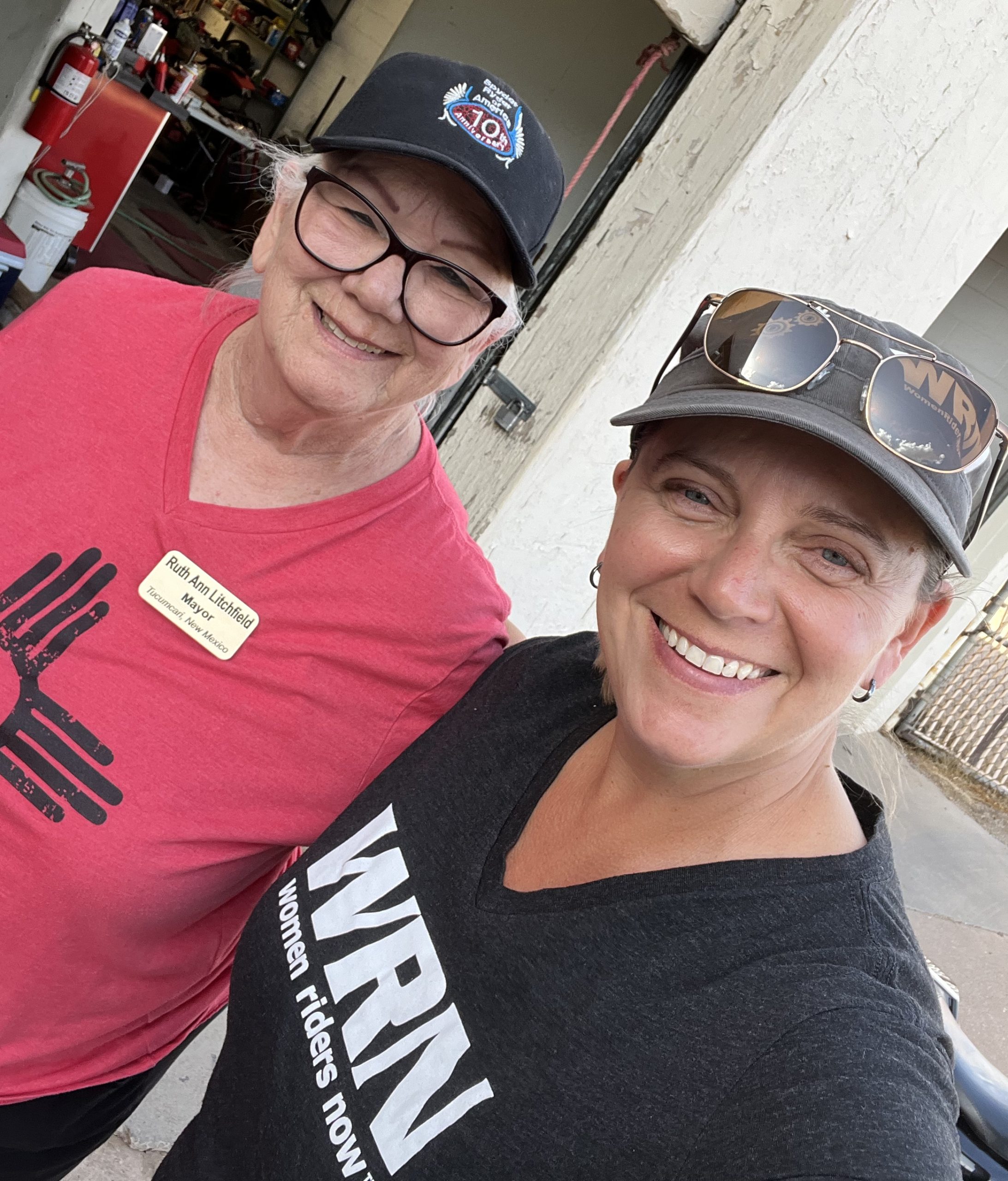 Tucumcari Mayor, Ruth Ann Litchfield gave us a warm welcome at Clay’s shop. She even hand-delivered pizza and beer to the shop as well as the two motels Chix were staying at to welcome us after an extra-long hot and sweaty ride from Amarillo, Texas. Talk about feeling special!

It is not a requirement to own a vintage motorcycle to be a member of the AMCA and most of the riders were on modern machines. But it was enthralling to watch the few tireless women who rode kickstart motorcycles. These ladies started every day’s ride by pushing their vintage bike to an open area, fiddling with the machine’s knobs and levers, and then, while straddling the bike and holding onto the bars for dear life, lurch high up into the air to come down on the kickstarter, like total badasses! 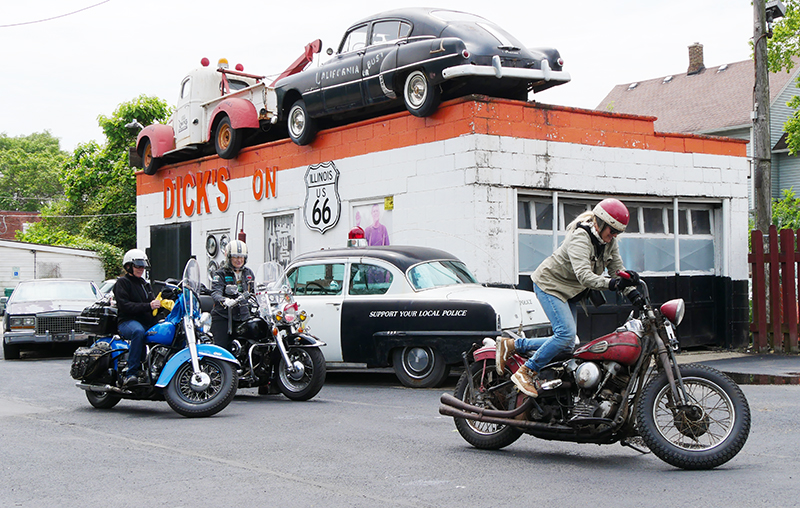 Jenny “Badass” Bass, who WRN featured about the women in boardtrack racing, has mastered the technique of creating enough compression to start her 1946 Harley-Davidson EL Knucklehead almost always on the first kick. Her long bleach blond mane flies wildly as she brings her bike to life, symbolizing the ride’s start.

Once those vintage bikes were running, it was time to go! But our big group actually morphed into many smaller groups, each navigating the same route on their own timeframe by using the Route 66 Navigation app. Catching up, passing, pulling over, and waiting for the vintage crew became my preferred routine on the 2022 Harley-Davidson Road Glide Limited the Motor Company so graciously lent me for the ride. 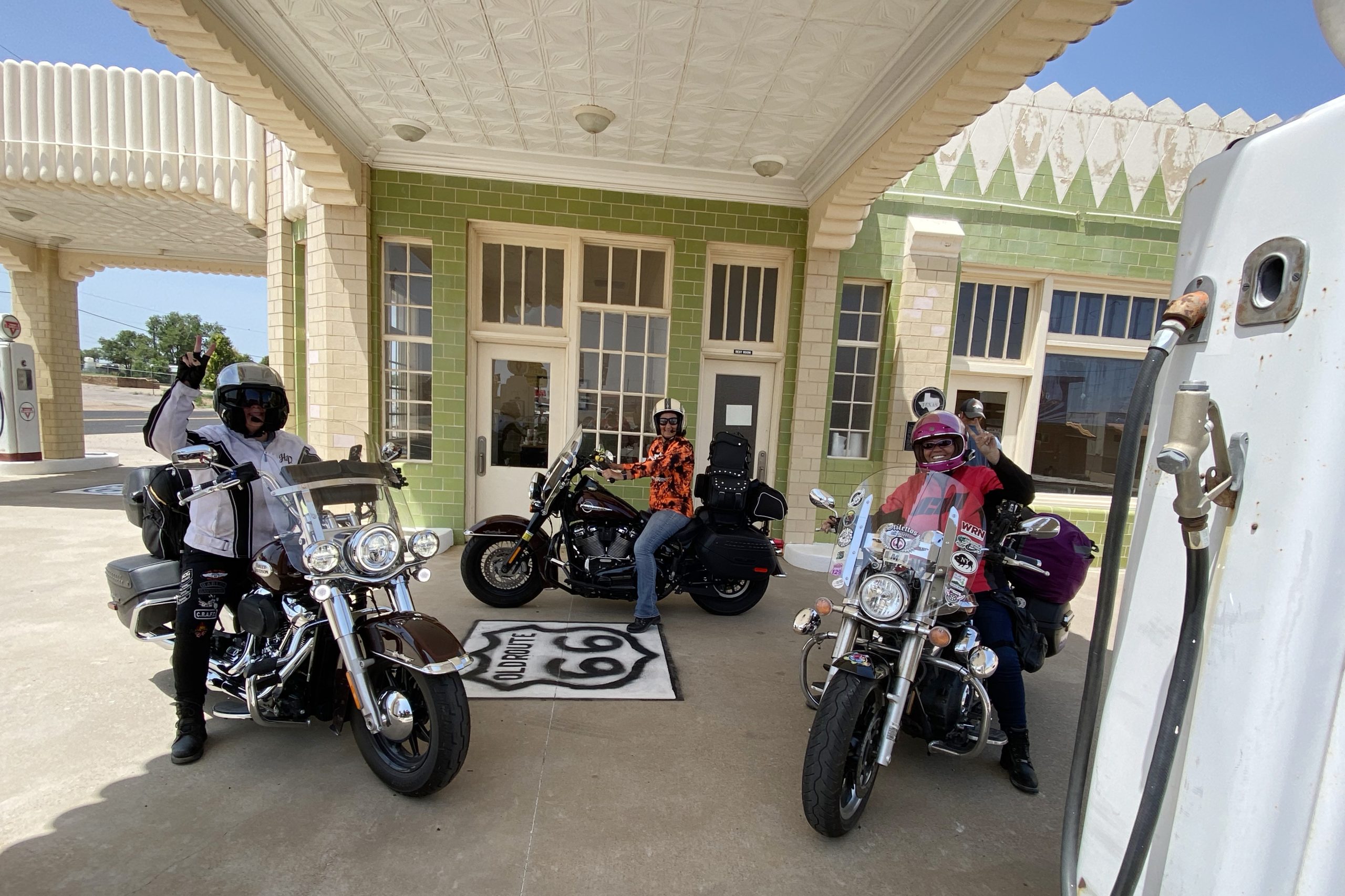 It was fun running into other Chix along the route. Here, it looks like Chris Bailey was taking photos at the U-Drop Inn in Texas when Kathy Strobele and Ivy Yapelli came along to set up for their own photo. This area was a big influence on some of the scenes in the movie Cars. 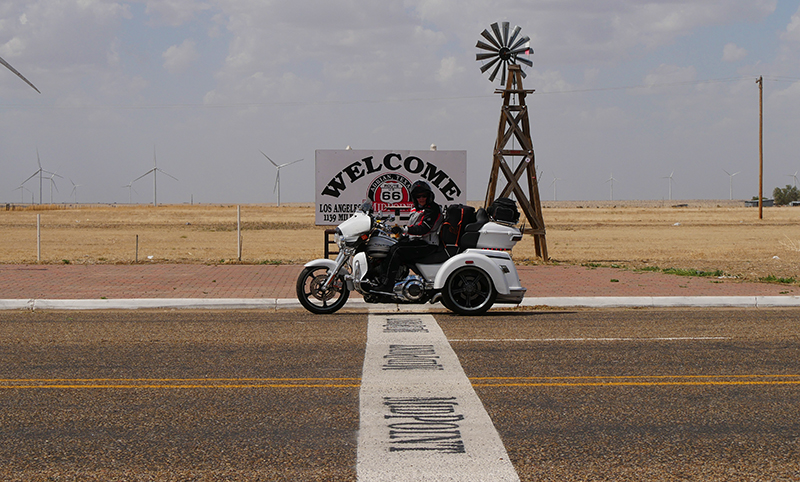 I was able to snap a pic of Chix rider Diane Huston riding her Harley-Davidson Trike over the Route 66 mid-point line. Diane was excited about finding two articles she wrote for HOG Tales many years ago in the Harley_Davidson Museum archives! 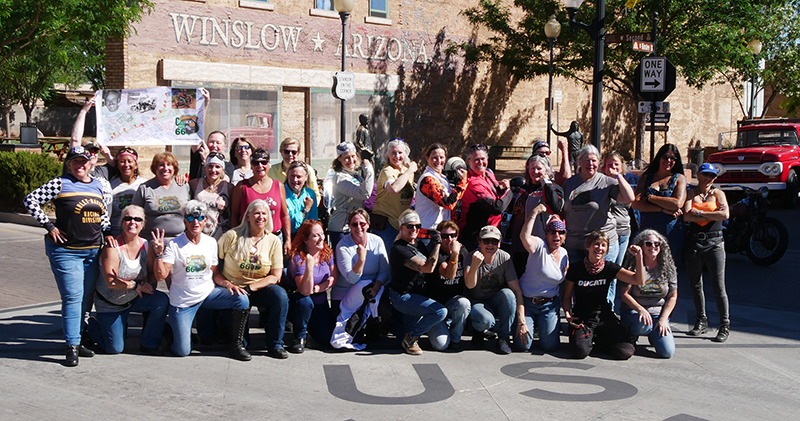 The wonderful folks from Winslow, Arizona allowed us to close off the famous “Corner” for 15 minutes so we could get a group shot! 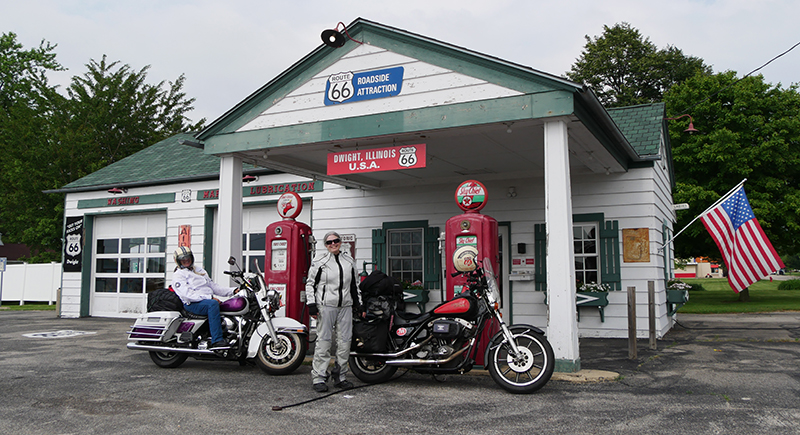 Marjorie Kleiman and Cheryl O’Brien stopped for photos at many of the service stations that are restored for tourists. Most of them were closed when we arrived but you can get some fun photos outside anyway.

This time I was able to get in the photo with the vintage riders and June Reaves, who usually rides her blue Honda Goldwing too fast to catch. 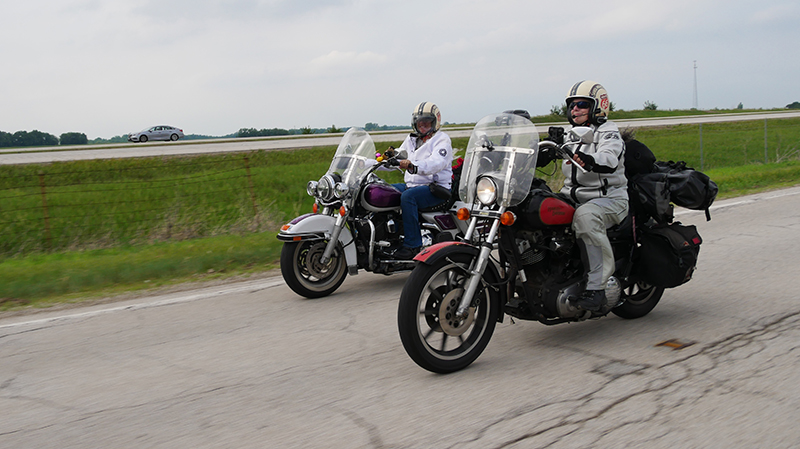 I enjoyed hanging with my industry colleague Marjorie “Shadow” Kleiman and her long-time friend Cheryl O’Brien—both riding older Harleys. This photo shows how Route 66 actually lies right beside the interstate at times through the 8 states. 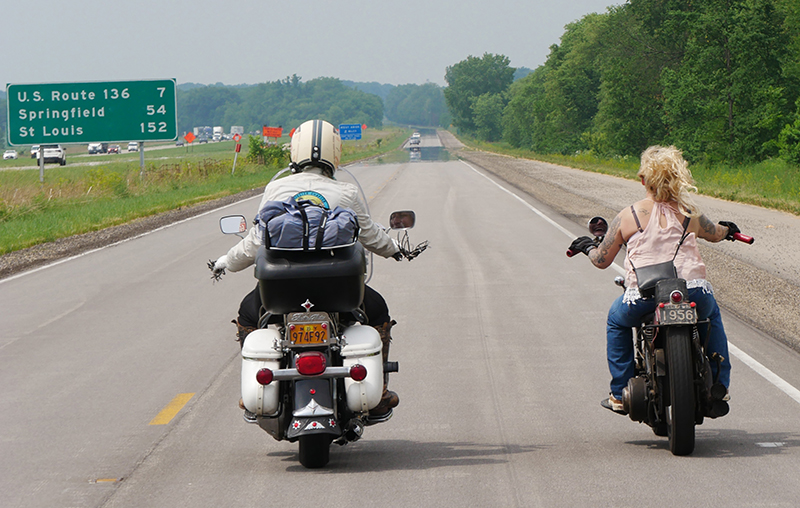 While the highway traffic zooms along, their occupants unaware of the scenery they are missing, we enjoyed a slower pace. Riveters founder Karan Andrea pilots her vintage 1974 Harley-Davidson FLH Shovelhead masterfully next to Jenny Bass. 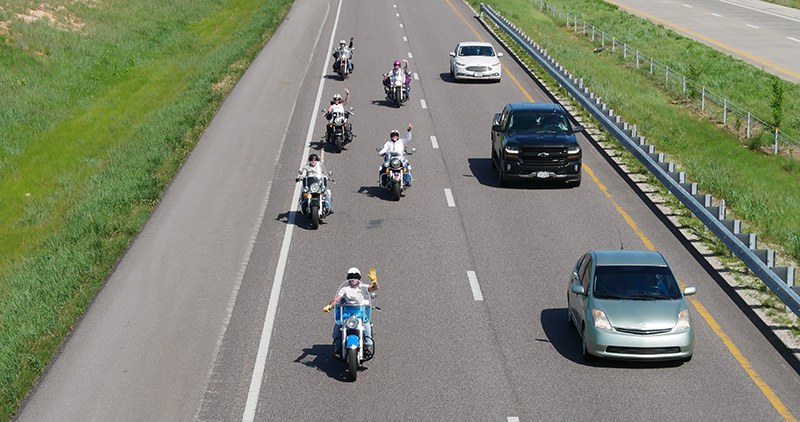 There are parts of Route 66 that have disappeared or are no longer rideable, requiring you to detour to the Interstate for a time. 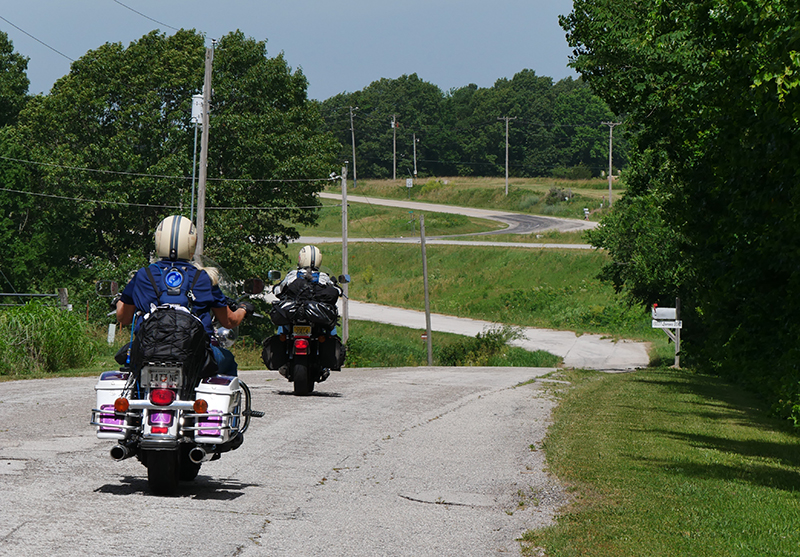 But there are also amazing parts of Route 66 that take you far from the Interstate and along trees and over really cool, old bridges. 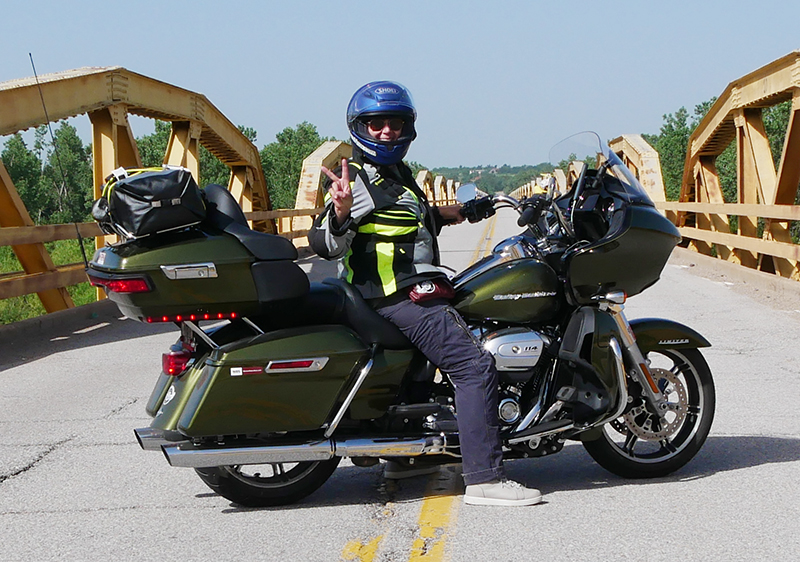 What is referred to as "Pony Bridge" is actually the William H. Murray bridge in Bridgeport, Oklahoma. Its 38 trusses seem to go on forever as you are crossing the longest bridge in the state. 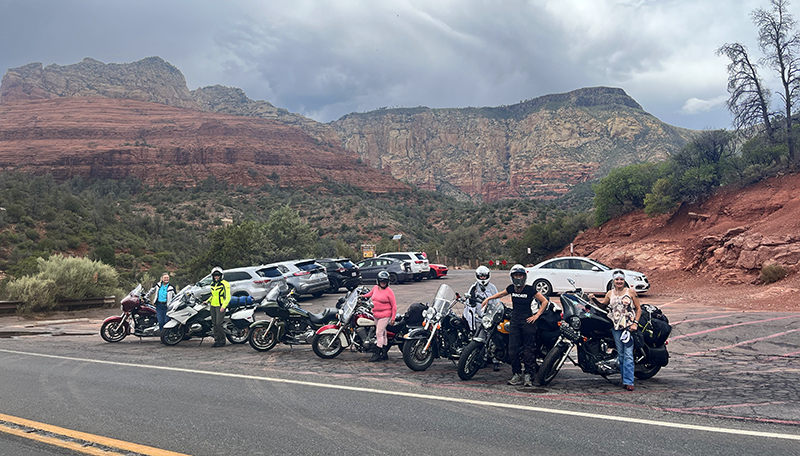 Veering off the route for just a day, some of us on modern bikes wanted a sporty ride through the canyons in Sedona and Jerome, Arizona. Well worth it, for sure!

The 2006 Pixar film Cars really represents the Mother Road and her history well. The film centers around a flashy modern race car whose intention was to get to California as fast as possible to win the “Piston Cup.” He winds up getting stuck for several days in the once-vibrant small town of Radiator Springs, Arizona.

The fictional town represents so many of the little towns along Route 66 that were quickly forgotten after I-40 was erected in the 1950s. Travelers bypassing all the businesses that had catered to Route 66 traffic unintentionally contributed to the demise of so many service stations, restaurants, ice cream parlors, motels, and more.

Old abandoned service stations pepper the landscape of Route 66. Many of the signs that remain standing along Route 66 are well worn. Bulbs are long gone and paint has faded while rust eats away what is left. It’s hard to imagine some of them as robust establishments, busy with travelers who needed fuel, tires, oil, a snack, and more. 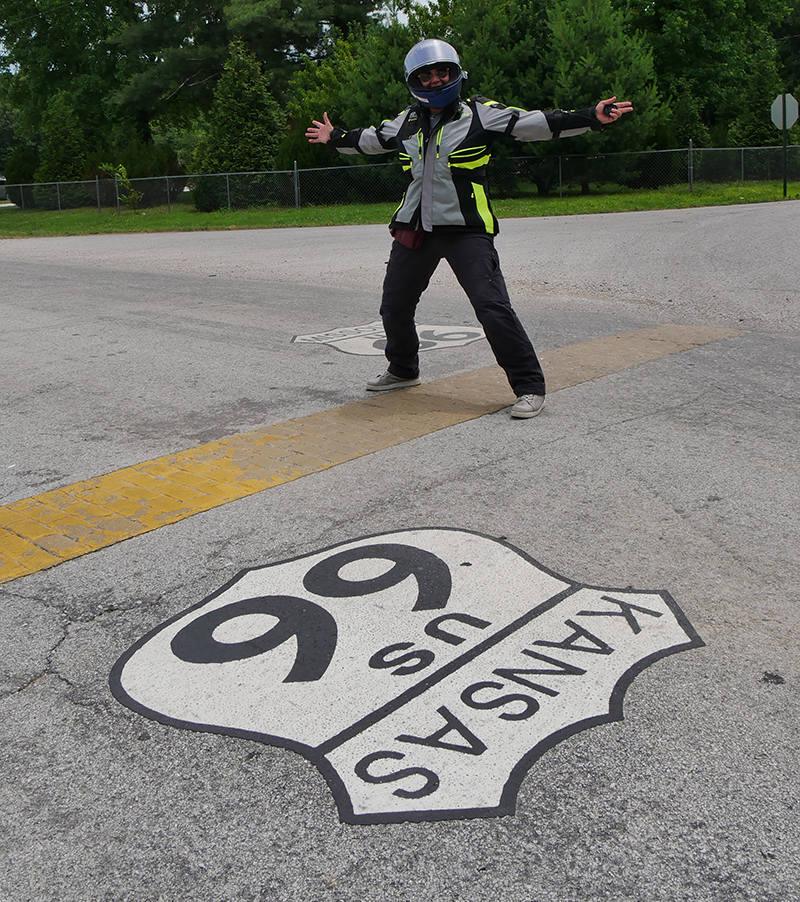 Route 66 is only in Kansas very briefly, but I was able to find the yellow brick road!

Luckily there are still plenty of real gems along the route that passes through 8 states—Illinois, Missouri, Kansas, Oklahoma, Texas, New Mexico, Arizona, and California. I would love to repeat the trip but in a classic car with a month to do it. I’d like to be able to read about the history of each place prior to arriving and then spend a good amount of time at each stop, getting to know the people who own the establishments better. 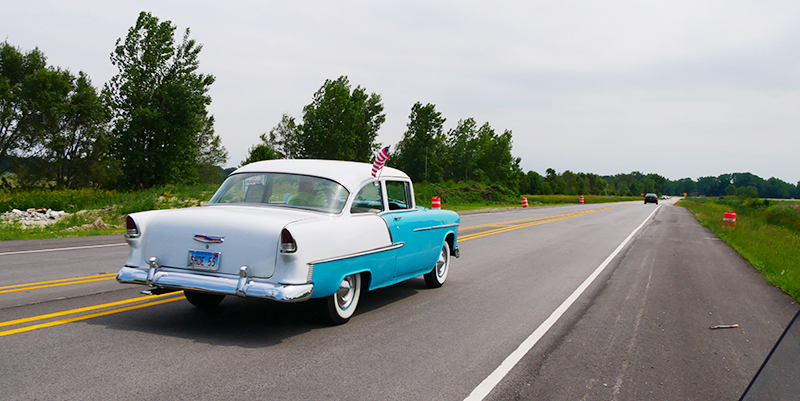 There are lots of classic cars along the route, but most are rusty and sitting beside the road. It was fun to see this one pass by! 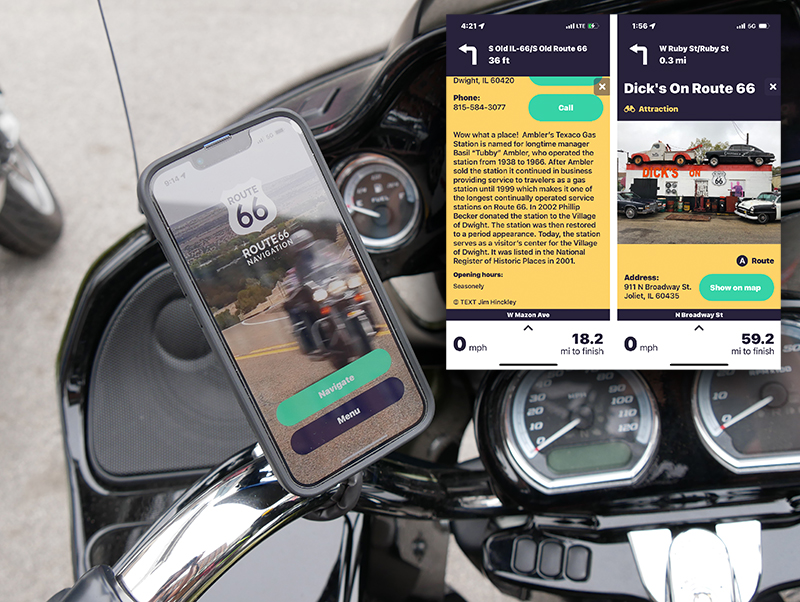 The Route 66 Navigation app was helpful but frustrating at the same time. It would keep us on the intended route, but had trouble re-routing if you missed a turn. I would still recommend it as it points out all the sights along the way. It shows you when a point of interest is coming up and you can click on it for more information about the POV. 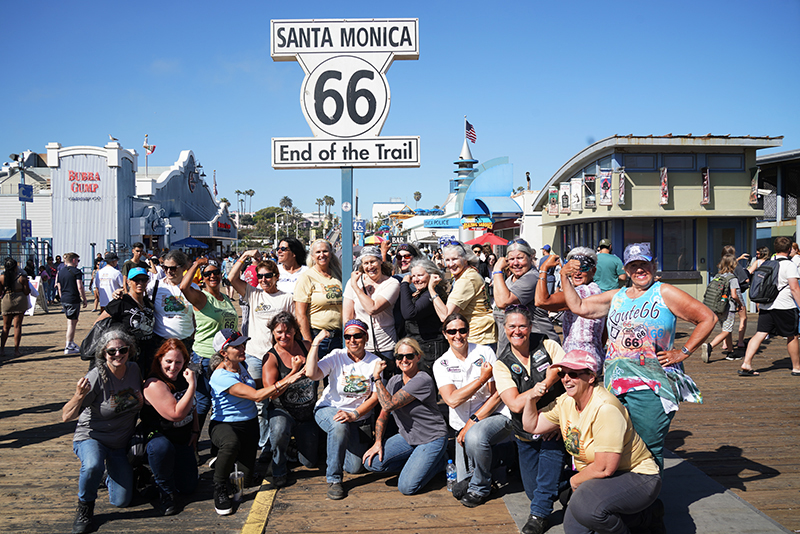 The final stop was at the Santa Monica pier in California. Some of us were so hot, tired, and hungry, that we missed the final shot. But we all made it and, boy, what a ride!

Support Those Who Support Women Riders

Please consider showing our sponsors, partners, and friends your support. Many riders received individual sponsorship in order to make their Route 66 dream come true. In addition, this women’s ride was supported by the following: 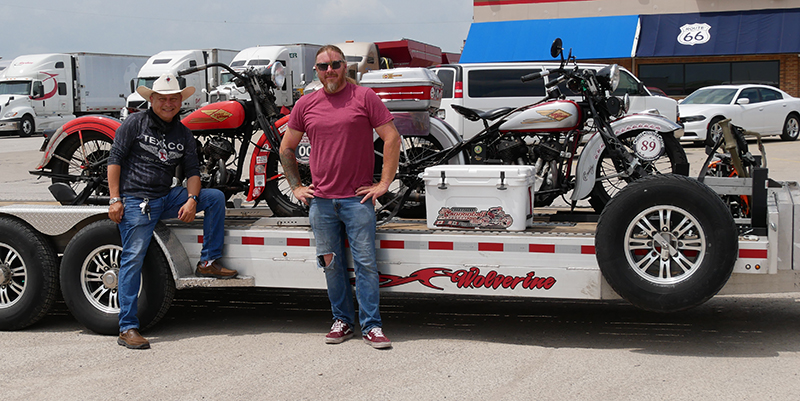 While the Chix on 66 were pretty self-sufficient, Jason Sims and Jose Torres were always just a short drive away with the Cross Country Chase flat bed. Unfortunately, after riding through some extreme heat, Cris Sommer Simmons' antique Harley ended up with Jason and Jose for most of the trip. 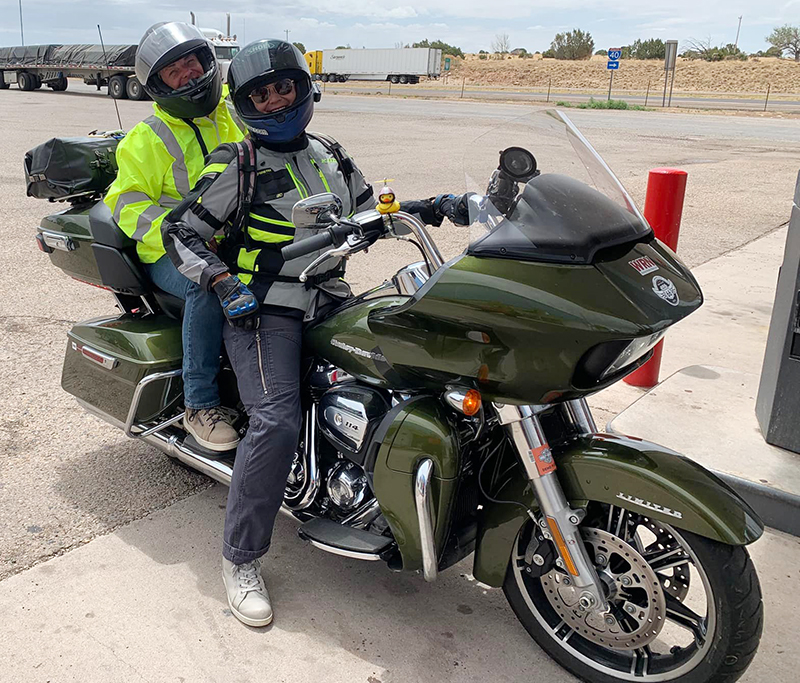 Thank you to Harley-Davidson for loaning me a brand new 2022 Road Glide Special to use on this epic ride. With a booming sound system to keep us dancing in our seats and plenty of luggage space, Kelly and I ate up 1,9995 miles in sheer bliss. Kelly was able to get hundreds of great shots from the back seat while I kept my focus on navigating the route safely.

There are literally thousands of photos of all the amazing sights and so many stories generated from this epic ride—narrowing it down to this one article was a difficult task. To see more photos and videos from Chix on 66, visit the WRN’s Facebook page and Chixon66.com.

If you would like to be part of the next incredible Riveters adventure, learn more about the AMCA and Riveter Chapter by visiting AntiqueMotorcycle.org.