Editor’s note: This article featuring inspiring women was originally published in the Winter 2022 issue of Ride Texas magazine. We have been given permission to share it with you on WomenRidersNow.com (WRN).

Read on about some of today’s top executive women in motorcycling, including two of our own who are featured—WRN Co-Chairwoman, Sarah Schilke and Hot Jobs! feature editor, Jan Plessner. 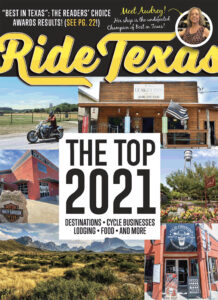 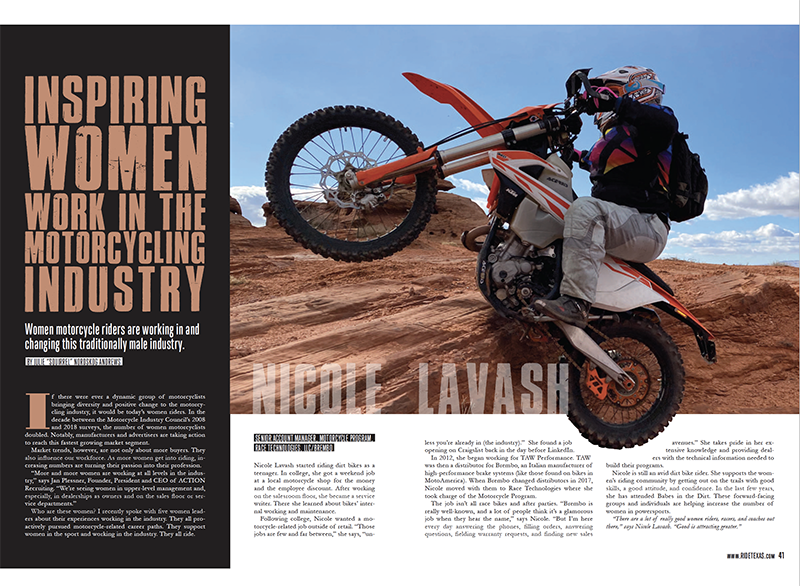 If there were ever a dynamic group of motorcyclists bringing diversity and positive change to the motorcycling industry, it would be today’s women riders. In the decade between the Motorcycle Industry Council’s 2008 and 2018 surveys, the number of women motorcyclists doubled. Notably, manufacturers and advertisers are taking action to reach this fastest growing market segment.

Market trends, however, are not only about more buyers. They also influence our workforce. As more women get into riding, increasing numbers are turning their passion into their profession.

“More and more women are working at all levels in the industry,” says Jan Plessner, Founder, President and CEO of ACTION Recruiting. “We’re seeing women in upper-level management and, especially, in dealerships as owners and on the sales floor or service departments.” 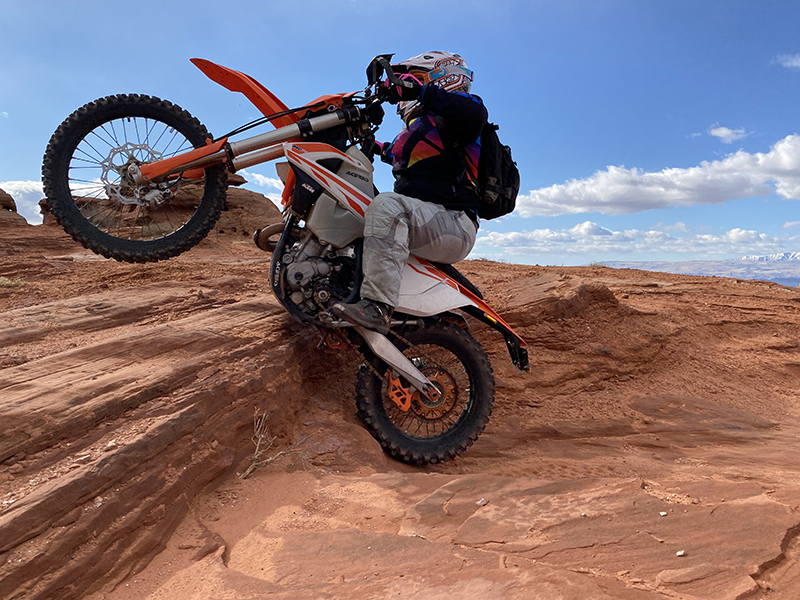 Nicole Lavash started riding dirt bikes as a teenager. In college, she got a weekend job at a local motorcycle shop for the money and the employee discount. After working on the salesroom floor, she became a service writer. There she learned about bikes’ internal working and maintenance.

Following college, Nicole wanted a motorcycle-related job outside of retail. “Those jobs are few and far between,” she says, “unless you’re already in (the industry).”  She found a job opening on Craigslist back in the day before LinkedIn.

In 2012, she began working for TAW Performance. TAW was then a distributor for Brembo, an Italian manufacturer of high-performance brake systems (like those found on bikes in MotoAmerica). When Brembo changed distributors in 2017, Nicole moved with them to Race Technologies where she took charge of the Motorcycle Program.

The job isn’t all race bikes and after parties. “Brembo is really well-known, and a lot of people think it’s a glamorous job when they hear the name,” says Nicole. “But I’m here every day answering the phones, filling orders, answering questions, fielding warranty requests, and finding new sales avenues.” She takes pride in her extensive knowledge and providing dealers with the technical information needed to build their programs.

Nicole is still an avid dirt bike rider. She supports the women’s riding community by getting out on the trails with good skills, a good attitude, and confidence. In the last few years, she has attended Babes in the Dirt. These forward-facing groups and individuals are helping increase the number of women in powersports.

“There are a lot of really good women riders, racers, and coaches out there,” says Nicole Lavash. “Good is attracting greater.” 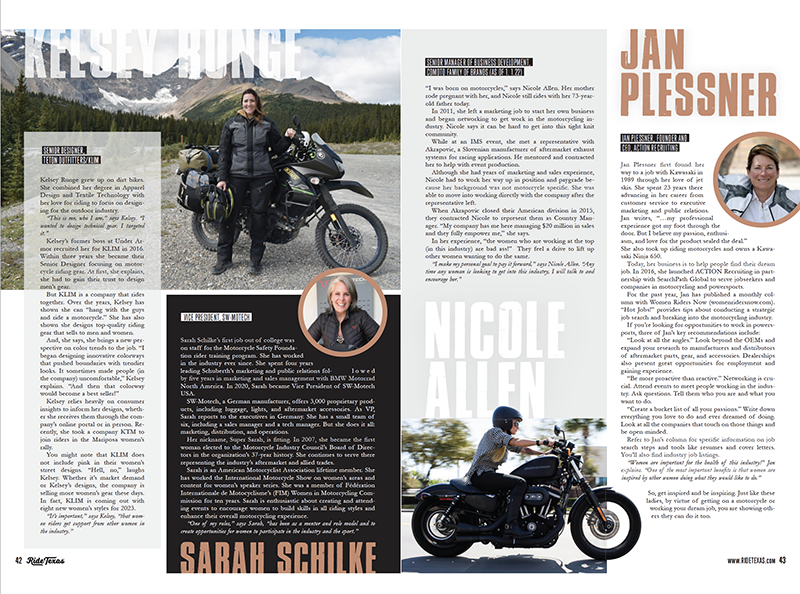 Kelsey Runge grew up on dirt bikes. She combined her degree in Apparel Design and Textile Technology with her love for riding to focus on designing for the outdoor industry.

“This is me, who I am,” says Kelsey. “I wanted to design technical gear. I targeted it.”

Kelsey’s former boss at Under Armor recruited her for KLIM in 2016. Within three years she became their Senior Designer focusing on motorcycle riding gear. At first, she explains, she had to gain their trust to design men’s gear.

But KLIM is a company that rides together. Over the years, Kelsey has shown she can “hang with the guys and ride a motorcycle.” She has also shown she designs top-quality riding gear that sells to men and women.

And, she says, she brings a new perspective on color trends to the job. “I began designing innovative colorways that pushed boundaries with trendier looks. It sometimes made people (in the company) uncomfortable,” Kelsey explains. “And then that colorway would become a best seller!”

Kelsey relies heavily on consumer insights to inform her designs, whether she receives them through the company’s online portal or in person. Recently, she took a company KTM to join riders in the Mariposa women’s rally.

You might note that KLIM does not include pink in their women’s street designs. “Hell, no,” laughs Kelsey. Whether it’s market demand or Kelsey’s designs, the company is selling more women’s gear these days. In fact, KLIM is coming out with eight new women’s styles for 2023.

“It’s important,” says Kelsey, “that women riders get support from other women in the industry.” 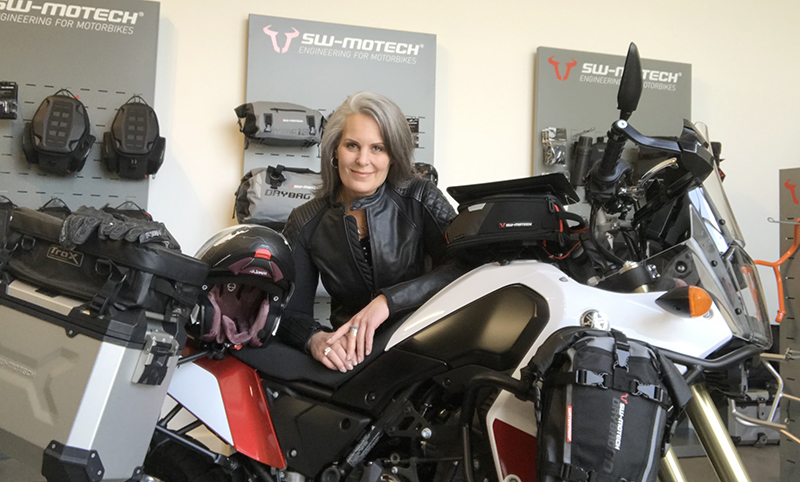 Sarah Schilke’s first job out of college was on staff for the Motorcycle Safety Foundation rider training program. She has worked in the industry ever since. She spent four years leading Schuberth’s marketing and public relations followed by five years in marketing and sales management with BMW Motorrad North America. In 2020, Sarah became Vice President of SW-Motech USA.

SW-Motech, a German manufacturer, offers 3,000 proprietary products, including luggage, lights, and aftermarket accessories. As VP, Sarah reports to the executives in Germany. She has a small team of six, including a sales manager and a tech manager. But she does it all: marketing, distribution, and operations.

Her nickname, Super Sarah, is fitting. In 2007, she became the first woman elected to the Motorcycle Industry Council’s Board of Directors in the organization’s 37-year history. She continues to serve there representing the industry’s aftermarket and allied trades.

Sarah is an American Motorcyclist Association lifetime member. She has worked the International Motorcycle Show on women’s areas and content for women’s speaker series. She was a member of Fédération Internationale de Motocyclisme’s (FIM) Women in Motorcycling Commission for ten years. Sarah is enthusiastic about creating and attending events to encourage women to build skills in all riding styles and enhance their overall motorcycling experience.

“One of my roles,” says Sarah, “has been as a mentor and role model and to create opportunities for women to participate in the industry and the sport.”

Nicole Allen, Senior Manager of Business Development, CoMoto Family of Brands (as of 1/1/2022)

“I was born on motorcycles,” says Nicole Allen. Her mother rode pregnant with her, and Nicole still rides with her 73-year-old father today.

In 2011, she left a marketing job to start her own business and began networking to get work in the motorcycling industry. Nicole says it can be hard to get into this tight knit community.

While at an IMS event, she met a representative with Akrapovic, a Slovenian manufacturer of aftermarket exhaust systems for racing applications. He mentored and contracted her to help with event production.

Although she had years of marketing and sales experience, Nicole had to work her way up in position and paygrade because her background was not motorcycle specific. She was able to move into working directly with the company after the representative left.

When Akrapovic closed their American division in 2015, they contracted Nicole to represent them as Country Manager. “My company has me here managing $20 million in sales and they fully empower me,” she says.

In her experience, “the women who are working at the top (in this industry) are bad ass!”  They feel a drive to lift up other women wanting to do the same.

“I make my personal goal to pay it forward,” says Nicole Allen. “Any time any woman is looking to get into this industry, I will talk to and encourage her.” 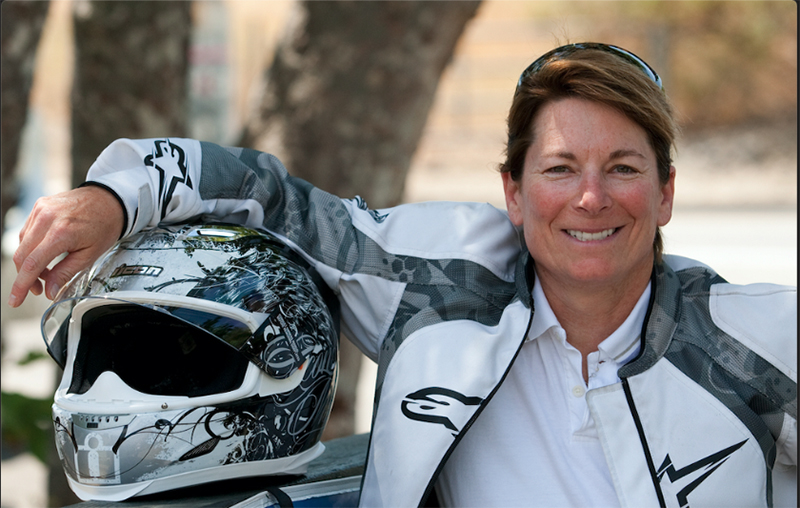 Jan Plessner first found her way to a job with Kawasaki in 1989 through her love of jet skis. She spent 23 years there advancing in her career from customer service to executive marketing and public relations. Jan writes, “…my professional experience got my foot through the door. But I believe my passion, enthusiasm, and love for the product sealed the deal.” She also took up riding motorcycles and owns a Kawasaki Ninja 650.

Today, her business is to help people find their dream job. In 2016, she launched ACTION Recruiting in partnership with SearchPath Global to serve jobseekers and companies in motorcycling and powersports.

For the past year, Jan has published a monthly column with Women Riders Now (WomenRidersNow.com). “Hot Jobs!” provides tips about conducting a strategic job search and breaking into the motorcycling industry.

If you are looking for opportunities to work in powersports, three of Jan’s key recommendations include

If you are looking for career opportunities to work in powersports, three of Jan's key recommendations include

“Women are important for the health of this industry!” Jan explains. “One of the most important benefits is that women are inspired by other women doing what they would like to do.”

Get inspired and be inspiring! Just like these ladies, by virtue of getting on a motorcycle or working your dream job, you are showing others they can do it too.