Motorcycle Riding on the Tail of the Dragon

I was recently in Maryville, Tennessee, and had the opportunity to ride the famous Tail of the Dragon, also known as Deals Gap on Route 129. If you’re not familiar with this road, it boasts 318 curves in just 11 miles, which is why its on many motorcyclists bucket list rides of the east. All the turns are banked and the pavement is near perfect. There are no crossroads, intersections, or driveways along the stretch of wonderful curves.

They’ve recently paved all the pull-off areas which were previously gravel. The blacktop makes pulling off the road to enjoy the view much safer. However, there are no guard rails. That means if you over-ride your skill level, you’re either going to ride off a cliff or crash into the mountain on the other side. The speed limit is 30 mph with 20 mph caution turns at some of the switchback sections.

I made a point of staying within 5 mph of the speed limit just to see if I could still enjoy the ride. The answer is a resounding “yes!” I arrived at the start of the Dragon in Tennessee at 7:15 a.m. on a Saturday morning. There was virtually no traffic coming or going at this early hour. In fact, from the start of the Dragon to its end in North Carolina, I passed only two riders. The husband and wife duo on Harley-Davidson touring bikes averaged about 10 mph below the speed limit. Even at their low speeds, they still managed to cross the double yellow line into the oncoming lane several times in the few minutes I was behind them.

I stayed a safe distance behind the two so as to not push them to pick up their speed. Once they noticed me, they both pulled onto a turn-off area and let me pass safely.

If you’re not used to riding a challenging road like the Dragon, here is the general rule: if the turn curves to the right, enter the curve from the left portion of your lane. That will give you the best view around the turn. Do your braking prior to entering the turn, then release the brakes and roll on the throttle slightly throughout the curve.

Of course, if the road curves to the left, enter from the right portion of your lane. Never look at the yellow line or an oncoming vehicle. Instead, focus on the end of the turn. Ride your own ride. In other words, don’t try to keep up with faster riders. If a rider wants to pass you, pull to the right side of your lane and wave them by.

Don’t push your skill limits on a public road. If you want to find your cornering limits, do so at a track day. There are track days all over the country most of which include professional instructors. Until next month, keep the shiny side up. 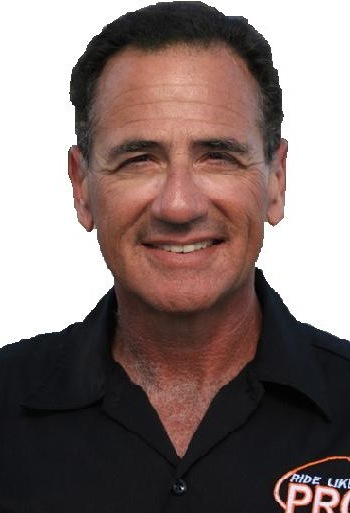 About the Author
Jerry “Motorman” Palladino is the founder of Ride Like A Pro, Inc., a company that teaches advanced rider training classes, and produces motorcycle instructional DVDs and books. Jerry is a former motorcycle police officer who teaches riders the same skills that motor officers use when riding their motorcycles. His classes are aimed at experienced riders who want to enhance their motorcycle skills. Visit RideLikeAPro.com to learn more about the classes and to purchase and download digital copies of the DVDs.

21 thoughts on Motorcycle Riding on the Tail of the Dragon